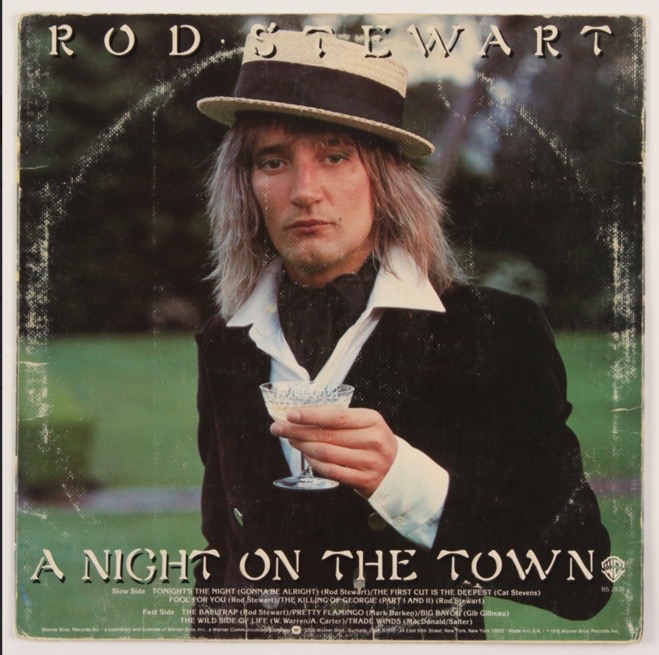 What about Renoir, Rod and Lefties?

Probably my first conscious recollection of Renoir’s work was through Rod Stewart’s “A Night On The Town”, released in 1976. It was when I was in the middle of my high school career and a hundred years after Renoir created Moulin de la Galette. It was pretty much a well-played album in my bedroom – you know, one of those “soundtracks to your life”. A Night on the Town would be included in there for me.

Back in the day when album covers were actually important and a visual feast with tons of other information, I used to spend hours looking at the visuals while listening to the music. Every young artist actually aspired to create album work and it was a common project for high school art classes. Stewart inserted himself into Renoir’s painting as one of the ‘regular class’ Sunday afternoon partiers in the Moulin de la Galette, a park in the Montmartre section of Paris, popular in it’s time for Sunday picnics amongst the middle class and working class locals. A much less talented artist than Renoir created the image for Stewart’s album, but hey…it turned me onto Renoir, and isn’t art all about creating unexpected connections, learning and making something new?

Pierre-Auguste Renoir lived from 1841 – 1919. What a time he must have had with all the historical events during that time. Just to put it into context, while Renoir was painting “Bal du moulin de Galette”, enjoying the modern-day pleasures of Sunday painting in the park in gay Paris, Custer and the 7th Cavalry were half a world away, thinking they could beat down a massive camp of indigenous peoples at the Battle of the Greasy Grass. I find that mind-boggling and both a little pretentious (Custer, that is). And yet, we get a good understanding of what some aspects of the world were like at that time from the stories they tell, orally and visually about the world events. It was also in 1876 that the Indian Act was passed into law in Canada, and Alexander Graham-Bell makes the first long distance phonecall to a shoe store in Paris, Ontario. WHAAAAT!?? That is out of left field!

Speaking of left…let’s think of Renoir’s quote about working with his left hand and arm. He suffered terribly from rheumatoid arthritis and broke his arm not once, but twice. It never stopped him from painting. He became ambidextrous and was surprised at how much better his work was. Renoir painted until the day he died, creating a small still life in the morning he passed. I hope that is me. He is said to have stated, “I think I am finally beginning to know something about painting.”

Renoir is said to have enjoyed life with great joy in the world around him, despite debilitating pain from the arthritis in his hands and feet. He was twisted and unable to walk from the rheumatoid, and his family members helped him put his brushes in his hands. His palette was attached to his wheelchair as he was unable to stand and move about. Even his canvas was adjusted, and instead of it being stretched on one big area, it was rolled, so that he could work on large pieces by unrolling a bit at a time. Ingenious…and driven, to paint through all of that pain and immobility to the ripe age of 78.

I’m slowing down. I have terrible bouts of excruciating pain in my hands, feet and bones as residual pain from cancer treatment. That’s just life now. Renoir is an inspiration to me to keep going, work through the pain and find ways to make art, paint and find the joy in life. The alternative is like looking into a dark abyss.

My hope for all of you (and myself) is that you find that wonderful place in the park where you can capture the mood and joy of life and living, and die with a paintbrush in your opposite hand, eating a fresh fruit galette and listening to the racey music of your teen life. Rock on like Renoir!

Grace Quote of The Day – On Naming It!