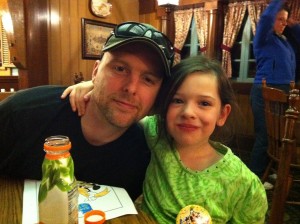 Enjoying a bowl of customary cereal before bedtime last night, we asked Grace if she could think about how it might have been made.

“Yep! I know that. It has rice, corn, and other stuff in it and they grind it all up with some milk first. Then they take one of those things that you mush up potatoes with and that makes the criss-crosses, you know? After that, they bake it, cut it into squares with scissors and put it in a cereal box and send it to the grocery store. I think they have little fingers like me so they can do it.

Also, it’s very good because it has a lot of weed in it.”

(Kevin and I sought some clarification on the “weed” after we finished choking.)

“You know….WEED!!!! Farmers in Saskatchewan  – they have a lot of it growing in the wind. That’s what makes it so good. It’s yellow……Why are you LAUGHING? It’s true. It’s very good for you.”

Right. Wheat. Farmers in Saskatchewan have it.

Tags: Grace Quote of the Day