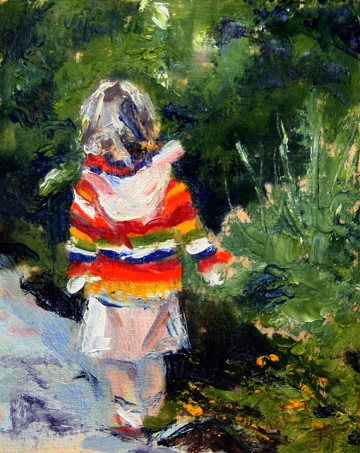 This little gem was created with a palette knife when I was just starting to paint in oils. It’s probably one of my most favourite, intuitive little paintings, and it sits right at the top of the stairs when I enter my studio. It reminds me every time I see it, not only the joy of watching Grace walk down the road at my parent’s cottage in Haliburton, but the joy and inspiration I had when I first learned I could use oil paints…and create works!

Finding constant inspiration is not easy.

Staying constantly inspired is not easy.

“Inspiration is the beginning, the middle and the end.”

Right. She’s definitely right. I can recall that first rush of picking up a paintbrush, thinking of not one, but many things I wanted to capture around me and freeze in time with paint, but as the years go onward, and you begin to morph in your subject matter; your sometimes jadedness at the art world enters into the practice and it becomes a little more different to maintain that same level of inspiration. That fire in the belly – that feeling that nothing else in the world mattered but the painting in front of you and getting the idea of it down on the canvas.

Just what is inspiration?

It can be described as this sudden, in-the-gut, brilliant idea, connection of ideas or things and then the fervor to act upon it and to create something new out of it. That would be the feeling for me at the start of a painting. That germinating idea fed by sun, soil and water that causes something buried deep within me to burst through and demand to live and grow.

The middle inspiration – yeah, that’s a little more difficult but I’d describe it as getting through the drawing, the underpainting and into the painting layer where I start to see my idea morph a bit. Sometimes I hit a wall in every painting and to me, that is where the inspiration has burnt itself out and needs some fuel. Again, that initial seed of an idea has grown, needs to be repotted and trimmed – just a little more care. Once you do that, and push through that ebb and flow, it all falls into place and you are inspired to finish what was started, even if it is somewhat different from your initial vision. It is worthy to move onwards with.

The end inspiration? When I’ve laid that last brushstroke and can look at the whole piece as though it was meant to be like that right from the start. Again, while it may not look like or feel like the initial seed of inspiration, it has this delicious finality, like a piece of fine chocolate and a good brandy after an exceptional meal. It’s like plucking the fruit off the vine of something that you grew from deep inside of you, and savouring it. That taste leads me to think of something new to germinate. Something different I might like to taste or try in my next work. If it doesn’t ‘taste’ like that…there isn’t much movement from one inspiration to the cycle of a new one.

So that’s how I see the cycle of inspiration in a very short description. There are of course, so many things that ‘feed’ and grow a painting or drawing as you progress through it. Sometimes it’s a good conversation with a friend where you might draw some insight into it, fertilizing the idea. Sometimes it could be a great piece of music that just resonates through your soul and moves you along in the journey. (I highly recommend loud music, dancing and moving to the music when you’re in your studio.) We, as artists, hold so much in our brains that we often forget what the body can generate and manifest. It needs to move and let out those ideas, to feed the inspiration.

What inspires you through the beginning, middle and end of a painting or drawing? Dig deep. This isn’t easy work and there are no easy answers.

If you’d like to continue this type of conversation through a drawing class or painting class, please join us on janicetanton.net where you’ll find a few more likeminded thoughts and discussions in a private community of artists, all levels and backgrounds.

Surprises! :: What Art Can Do To Make You Change Your Perspective & Perception