How Much and How Good?

From September 10th – October 26th, 2012, I was a BAIR (Banff Artist In Residence) at The Banff Centre. During that time, I had access to incredible facilities, perfect studio space and the valuable interaction with other artists from all over the world.

I was focussed on starting to work through my research Gwaii Haanas National Park & Haida Heritage Site Artist in Residence. Things don’t always go as smoothly as one would wish. Delayed by a week getting into the residency because of an encounter with a deer earlier in the summer, our vehicles weren’t available. It was frustrating to want to “get at it”.

Just a few days after moving into the studio in Banff, due to extenuating circumstances, the Artists In Gwaii Haanas exhibition was going to be moved to late February. Originally, it was to open November 9th. Needless to say, this also caused a bit of stress and mental panic, as my well-laid plans were to work on Haida Museum exhibition first, and then move along to polish works for the CAMP show at OAG in early January, 2013, also hoping to include some of the work for Haida Gwaii in the CAMP show. Ey yi yi……now, while it looked on the outside as easier with more time, in fact, I had less time and more pieces to create! I also had to cancel plans I was making to attend a Master Class with the incredible Bo Bartlett at the incomparable Philadelphia Academy of Fine Arts that would land in the last quarter of the Banff residency. Dang it – well, I’ll catch up with Bo another time. Priorities! Yes, I was disappointed in myself and the circumstances, but there’s only so much that’s physically possible.

Mentally, I think that was the button that put me into high gear, but sideswiped “plans” for works I wanted to create. This has an upside in that with shorter time, I didn’t have as much time to THINK too much and let that get in the way of the painting. After all, what I had really hoped for was some incredible time to experiment and explore as a painter. In the end, that happened anyhow. I did the largest, most expressive piece I’ve ever painted, now powerfully throwing out it’s energy in our living/dining room, waiting the final work on the figure.

Throw in two studio tours in that short period of time, and you have either an experimental recipe for disaster, divorce, high creativity or all the above.

I’ll let you off the hook and say that it was the high creativity that ended up working for me. Thank goodness – Kevin and the kids really were great at supporting the long nights, early mornings, laundry and household chores, although there was a lot of Subway meals going on. The only disaster that happened was the earthquake over the weekend in Haida Gwaii. Yikes.

I was a bit oblivious to what I was doing, I have to admit. Shutting pretty much everyone and everything out, I think I just became a painting, sketching machine. I didn’t realize it until several people that I really respect as artists and critics, on different occasions remarked at how incredibly prolific I was.

I still don’t see it – I admit hoping for more.

While not everything is fully finished, here is the “count” which doesn’t fully quantify the intrinsic value of the residency for me, but sure does point to some kind of weird prolific production tendencies and desires, given the time and space of only 33 days. I think it’s good to step back and analyze your ability to produce work in some form. Maybe I need to give myself a break! Taking ten days now to totally rest and visit family and friends in Ontario….if I can get in through Hurricane Sandy. 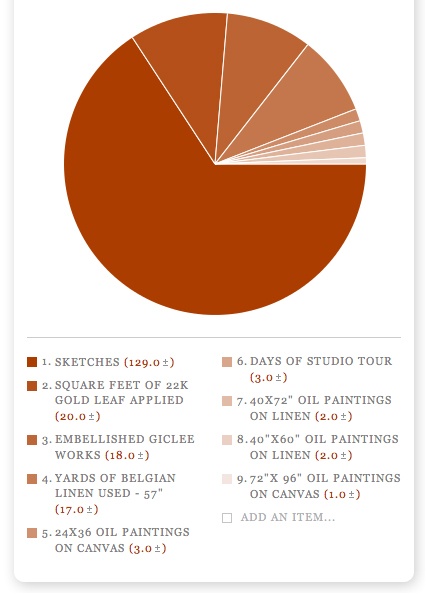 Total Number of Actual Working Days In The Residency: 33

What does “prolific” mean to you?

How Do We Measure? – 10 Meaningful Ways and 10 Stupid Ways to Measure our work as artists.

Artist Kate Smith: How do you measure success as an artist?

Grace Quote of the Day :: The Science